Ever since I was preparing myself for my first performance as a Hallstatt weaver at a prehistoric (multi-period) event Krumbenowe, I knew that I wanted a costume different from a peplos worn by most of the women representing La Tene Celts. As the non-archaeological public is not familiar with the dating of fibulae and jewelry, I wanted to have something more different. Although no complete dress from the Early Iron Age has been preserved, we have at least an approximate idea of it thanks to so-called situla art. Back then I quickly sewed from materials I had at hand a costume that approximately corresponded to these images, but I wished to make later a more accurate reconstruction of clothing from one particular picture (of course, I chose the most complicated one!) using textile patterns from Hallstatt and other sites from the Early Iron Age. 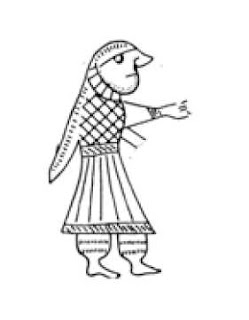 In contrast to a straight dress reaching mid-calf and a cloak or veil of various lengths worn by most women depicted in situla art, a woman on the belt hook from Carceri wears a veil, a checkered sleeveless top, from under which protrude long narrow sleeves of an undergarment (shirt? tunic), a skirt with a decorative band at the bottom edge, and baggy leggings. 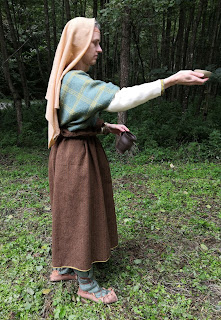 It seemed to me that the correct shapes of the top and of the leggings were most important for achieving an authentic silhouette, and therefore I started with them. I thought the top might be similar to huipil - a blouse of the Central American native women. (Only much later, after the rectangular garment had been already woven, it occurred to me that the shape of the garment no. 3 from Verrucchio might give a similar result.) The pattern of the fabric was inspired by the textile fragment HallTex181, but because my table loom (I didn't have a vertical loom yet at that time) does not allow to weave diamond twill, the fabric is in plain weave. The resulting silhouette is quite similar to the original picture (including the diagonal position of the checks). However, due to the narrow width of fabric limited by the width of my loom, the garment is too short and tends to come out of the skirt when I move my arms. 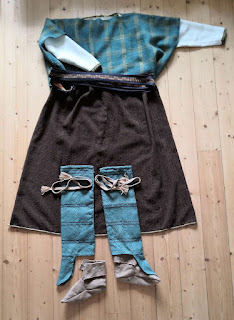 The leggings (and socks hidden underneath) were inspired by finds from the Italian glacier Vedrette di Ries, with added colour stripes in the fabric for leggings to make them more similar to my model image. Even though the leggings are quite wide, they did not bulge out above the ankle, where they were tied by shoe laces. Probably the fabric was too coarse and stiff. Or their bulbousness in the image is exaggerated.
Both the huipil and the leggings were woven from wool yarn Nm 8/2. In hindsight, and compared to other parts of the costume, this fabric now seems too coarse to me. Considering the other above-mentioned shortcomings, I may redo them sometime in the future. 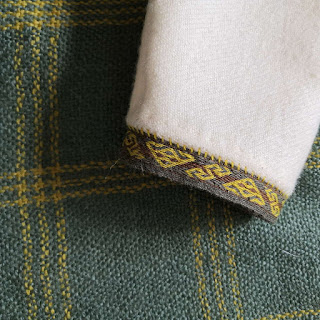 After a two-year hiatus, the pace of work on this costume picked up after the "Return to Býčí skála" event (a celebration of the 150 years anniversary of this important archaeological find) was announced this spring - a week after I used my original Hallstatt skirt to make a modern outfit. As it is uncertain whether the depicted skirt is striped or whether the vertical lines represent folds, I planned from the start to weave a fabric with subtle stripes formed by alternating S-spun and Z-spun warp thread. Such spin-patterned fabrics are quite characteristic for Iron Age. The reason why this weaving project was on hiatus was my need to spin enough S-yarn to combine with the commercial Z-yarn I had. However, then I discovered that this commercial yarn was completely unsuitable for weaving. (The threads stuck to each other and didn't create a shed.) Fortunately, I found two more suitable wool yarns in my stash (Z-spun 5/1 yarn and S-spun 8/1). Because of their gray color, which did not match the rest of the costume (the original plan was to use natural brown wool), I dyed them with walnut skins before weaving. Unlike in two previous projects, I used a vertical loom this time, because I wanted the bottom band visible in the picture to be a tablet-woven starting border. The weaving was again complicated by the small width of my loom (this time 60cm). Therefore, I wove a long starting border (the originally planned 240 cm shrunk to 210 cm after releasing the tension) and then wove the fabric on the loom as four separate panels, which were then sewn together. 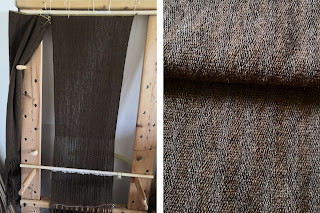 The triangular shape of the skirts/clothes on highly stylized figures on iron age ceramics (e.g. from Sopron) has been interpreted as a representation of swirling movement, but the woman in my model picture is not dancing, but serving a drink at the feast, and therefore I believe that the shape of her skirt, different from the straight skirts of other women in situla art, was caused by its different cut. Given that one of the textiles found in Hallstatt was sewn together from several trapezoid pieces, sewing a gored skirt could be probably justified, but I really hate cutting into handwoven fabric. On the other hand, I often struggle during weaving with keeping my selvedges parallel and not tapering, so this time I intentionally allowed the fabric to get narrower. After sewing all the seams I got a tube with a diameter of 210 cm on one end and 160 cm on the other end. However, the conical shape is not visible in the final photo. (Maybe it will be noticeable when moving, but I couldn't observe myself while walking).
The undershirt, socks and veil are made of purchased woolen fabrics - the shirt and socks from medium weight twill and the veil from thin tabby. The veil and socks were also dyed with walnut skins.
Decorative bands are an essential part of this costume. The sleeves of the shirt are trimmed with a replica of the band HallTex123. The belt was inspired by HallTex20. The headband is not based on one specific find, but its pattern combines motifs of several small tablet woven fragments from Hochdorf and Hohmichele. Garters patterned just by threading of tablets (SSSZZZSSSZZZ) can be used in various periods, because we know single-colored bands with twist alternating in groups (most often triplets) of tablets from the Iron Age to the late Middle Ages. 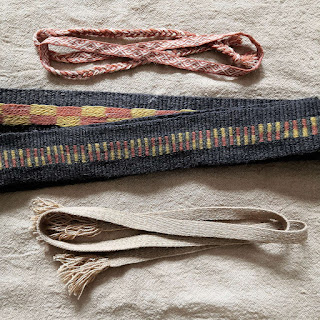 I still have no idea what the segmented thing that leads from the ear to the chin of the depicted woman could have been. Instead of it, my costume is completed by two fibulae based on the find from the Hallstatt cemetery (grave 65, period D1). Other accessories will be added later. 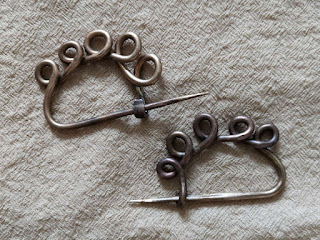