Revision of the pattern from Moshchevaya Balka

I have seen the pattern from Moshchevaya Balka (with various versions of this name attached to it - Moscevaja Balka, Moščevaja Balka, Moshtcevaya Balka etc.) floating arround internet many times, but more details about it were hard to find. I do not know who is the author of this original pattern for 13 tablets, but few months ago (or is already more than a year ago?), Silvia Aisling Ungerechts designed a new version of it. Based on the fact that the dots in the centres of eyelets looked larger in the photo of the original band than in the reconstruction, she suggested the possibility that the pattern had been woven on 16 tablets.

When I was finally able to track down the Russian book about finds from Moshchevaya Balka, I was really curious what I would see. It turned out, that both authors were correct partially. The pattern was woven with 13 tablets, but the eyelets are as big as Silvia suggested. To fit them in the narrower band, outer parts of the pattern were cropped. 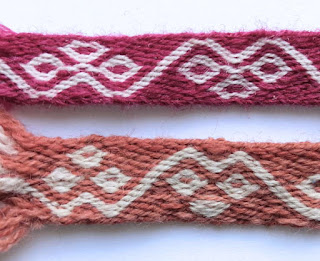 But there is more to see. The band starts with three vertical lines (it is the best plasce to count the number of tablets) followed by three lozenges, before the well-known meandering pattern begins. But in contrast to both existing reconstructions depicting groups of three separate eyelets, the eyelets in each group are connected in six out of eight repeats in the available photo. 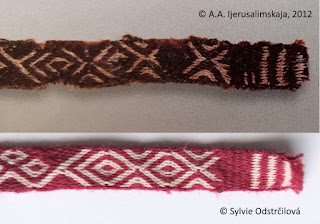 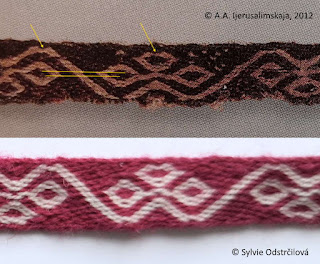 The twist in the border tablets and directions of twill diagonals are my inventions, as the background of the band is too dark to see the details.

The final version of my pattern was created only after I wove my sample, and it was not tested yet. If you find any mistakes in it, please let me know, so I can correct it.