In my last post I mentioned how seeing the reverse side of the band changed my opinion on its pattern. Today I want to write about more bands from the Louvre collections, which according to their obverse (right) sides looked like they have been made by the same weaving technique, but their reverse sides told a different story. 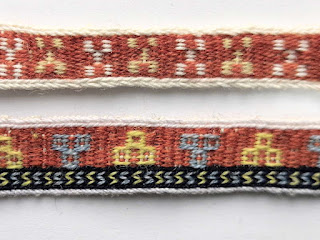 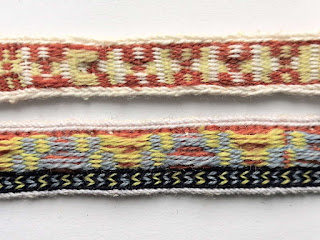 The pattern of the band E32132 is similar to another band from Antinoé, currently in Lyon museum, which was analysed by Silvia "Aisling" Ungerechts. The main difference is that only two colours were used in the Lyon band, but three in the Louvre band. I suspected that the technique would be similar, but did not know at first how to add the third colour into the pattern created for the tablets threaded with two threads only. Therefore I tried several different approaches. 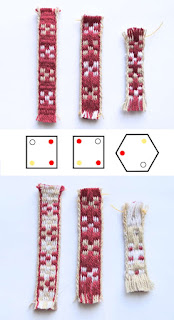 This first set of experiments showed me that red threads need to be opposite white and yellow threads. As the warp threads pass over one weft only, I positioned the tablets on their points. However, the reverse side still did not look right: Where 180° turns were used, yellow and white threads twisted around each other, and this was not observed in the original band. Finally, inspired by Silvia's idea of the two-hole tablets, I used 18 tablets with two threads instead of nine tablets with four threads, and the problem with the superfluous twist in 180° turns disappeared. 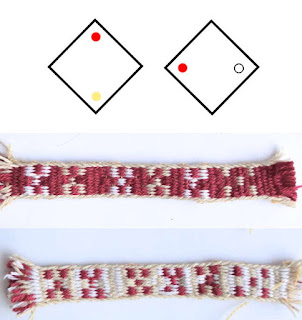 However, there is another band in Louvre (E32133) with a similar pattern on the obverse, but totally different on the reverse. I was at a loss how that was made.

I carried on weaving other reconstructions, until I got to the pattern on bands E32095, E29584 etc. As this pattern shared similarities with E32132 (alternating motives in two colours, warp in motives going over one weft only), I threaded the tablets for it in the same way. But I discovered soon that the reverse of the band E29584 looks differently. Having noticed that the warp floats are longer on the reverse, I thought at first that the upper shed was used only. However, when I tried this method, the floats were too long. 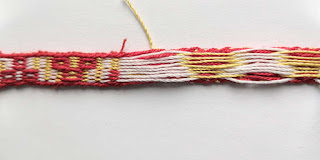 I will skip all the dead ends I ran into while trying to decipher this pattern. The final sollution proved to be 45° turns: alternating between the upper shed when tablets stand on their points and the main shed when the tablets are in the typical position with the sides parallel to the ground.

Maybe the difference of band E32133 can be explained by the same technique (my first experiment was not successful yet), maybe another technique was used in that band. It does not matter. What matters is the question: How much can we trust the accuracy of the reconstructions based on observations of the right sides only?


PS: My joy of solving the pattern of E32095 etc was premature. Two days later I realized that one repeat of the original pattern is 20 turns long while my version is 24 turns long. Therefore experimenting will continue...